This post is about patience, trust, and discomfort. It’s about having patience with your child’s learning process and trusting their innate curiosity and unique ways of thinking. And it’s about dealing with your (our) own discomfort as parents with not having all the answers and not getting them quickly.

The other day I pushed this puzzle across the table to the 8-year-old (yes…he’s 8 now!): 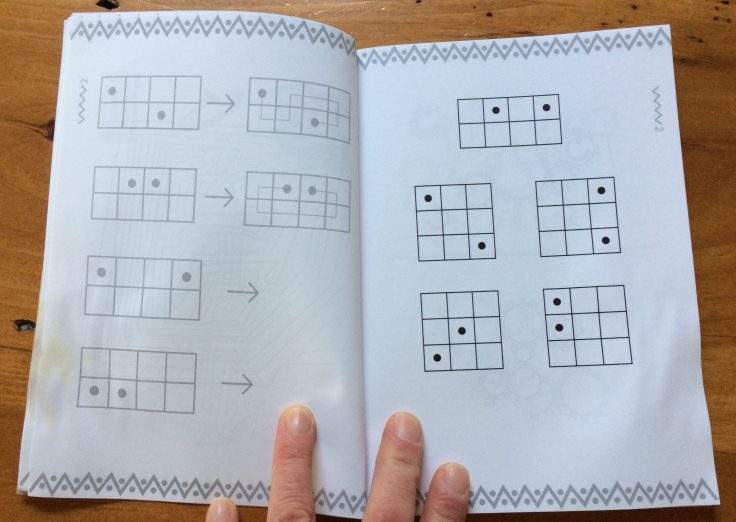 It’s from the puzzle book Without Words by James Tanton. The magic of this book is that there are no words to explain the puzzles. (An aptly named book, eh?) You’ve got to figure out what you’re being asked to do by looking at a few examples. Except for some open-ended hints at the back of the book, there is nothing else to guide you. The fact that there isn’t even an answer key so that you can check your work really irked my impatient “am-I-right?” self.  I took a deep breath and tried anyway, because that’s the example I’m trying to set…

So, back to the puzzle that I pushed over to the 8-year-old. He looked at the examples. He said “Oh. That’s easy,” and he sailed through the first couple puzzles. Then he hit these:

He tried to draw a path cutting through a corner. But we agreed that based on the examples, that didn’t really seem to be allowed. Then he tried to go outside the box. But again, that didn’t seem to be allowed. So then he gave up. And, frankly, I was a little bit bummed that he did. Wasn’t my goal to teach persistence? Stick-to-it-tiveness? My kid was not sticking to anything! Truth be told, though, I also wanted to give up. I wanted to look in the back of the book for the answers so I could coach him in the right direction. But the answers weren’t there. So, we closed the book and moved on to other things in our day.

Here’s the thing, though…the thing I didn’t expect. Two days later, while eating breakfast, the 8-year-old pulled the puzzle book back out and opened to the page we had been working on. He said, “Look, Mom. This is how you do it.” And he proceeded to trace a route through the grid that worked.

My jaw dropped. Seriously. It really did. How did he figure that out? After we had given up? So I asked.

“How did you figure that out?”

“I’ve just been thinking about it for a while, Mom.”

Remind yourself often of this. It is hard for parents to step back enough to give the kids time to let the gears turn. Time to noodle around. Time to marinate in a problem. (Pick your metaphor…take all the time you need!) For some reason, this is particularly true with math. Have you ever asked your child how much 2 + 2 is? 32 + 2? 198 + 13? How much time did you allow before giving her the answer yourself? Or starting to explain how to arrive at the answer? Perhaps you can remember one of your own teachers asking such a question in class – if you weren’t the one who processed it and raised your hand first, then you may have been one of the many who (wisely, though unfortunately) didn’t even bother to try because you knew the answer would be given before you could even consider the problem. My son was fortunate that I didn’t have the answers to the puzzle we were playing with, because without intentionally planning to, I allowed him the time he needed to let his gears turn.

(Mathematically…puzzles like those in Without Words are great problems to play with. Removing the words doesn’t just make it more accessible for some, it also requires developing good observation skills, mental manipulation skills, and non-verbal analogy skills. The problems in this particular book are all connected to deeper mathematical topics…parity and probability, for example. For younger children, the puzzles can begin setting a foundation for deeper understanding of these topics later. For older kids and adults, the puzzles can bring another dimension of meaning to topics that have already been “learned” in school. Whether this interests you or not, though, is irrelevant. The puzzles are engaging regardless of our being aware of their mathematical connections.)

44 thoughts on “Allowing Time for the Gears to Turn”