The 7-year-old caught the norovirus the other day. After a rough night and a weak day following, he stayed home from school today “just to be sure.” Which means I had a seemingly healthy child sitting around the house wondering how to occupy himself.

A few months ago I bought two weaving loom toys in anticipation of just such a day. I figured the activity was simple enough that I wasn’t going to need to handhold both kids through it, and they would get absorbed in the repetitive nature of it. So I pulled it out this morning, and the 7-year-old was hooked (pun intended.) This is going to be one of those mathy moments where math snuck into what we were doing. I did not plan this one.

After he had laid down the first layer of fabric loops and was part way through weaving the cross-wise loops, the 7-year-old said, “You know, Mom, there are 72 pegs on this loom.” 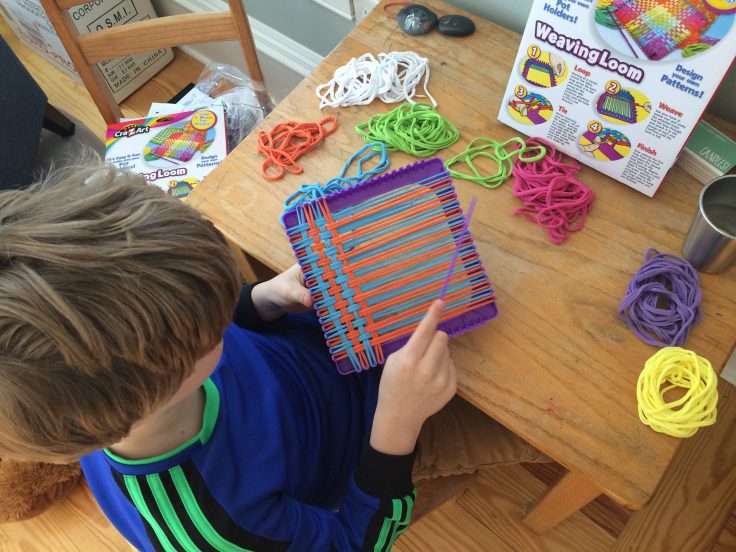 “How did you figure that out?”

Which was exactly as it should be. There was part of me that leaped at the thought that he had actually multiplied 18 times 4 to get his answer. But that would have been a tad advanced for his age. I thought it was possible that he had added 18 to itself 4 times. He has done that sort of thing before. However, his being interested enough in what he was doing to count all 72 of those pegs was pretty cool. And fantastic that he explored other numbers on his own, without my asking him any questions about it. He made the moment mathy, not I!

(Mathematically…the weaving loom was full of pattern practice that I didn’t even consider when I bought it. Counting rows. Counting columns. Choosing colors schemes. Over/under with the hook. It is not a stretch to connect these things to mathematical thinking. Kids learn best when moving their bodies and getting their muscles working with their brains. The cerebral act of noticing and analyzing a pattern or numerical information is both inspired and reinforced by the visual of the potholder taking form and the physical of the hands manipulating the work.)