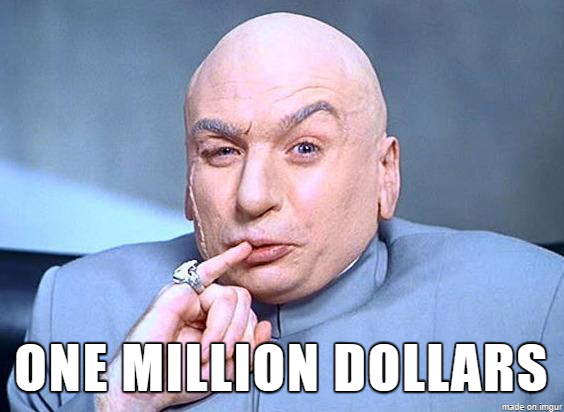 Remember that scene in the movie Austin Powers where Dr. Evil plans to hold Earth ransom for “one million dollars!” The rest of the bad guys in the room are unimpressed. Isn’t one millions dollars a little low? So Dr. Evil ups it to one hundred billion dollars! You can tell, though, that he’s not so sure. Maybe that’s because many of us have a shaky concept of just how big BIG numbers really are, and we have an even worse understanding of how those big numbers compare to each other.

Ask any kid for the biggest number she can think of and you will get some entertaining answers.

In all honesty, I really only have an academic grasp of large numbers. I can look them up and do the math to tell you how much a million compares to a billion. When it comes to conceptualizing those numbers, though, I struggle. I still gloss over the millions and billions and trillions that I come across when reading about astronomical distances and national debts. I do, however, think that it is possible to teach children feel comfortable with these numbers. Here’s how:

How Many Jelly Beans by Andrea Menotti and Yancey Labat is a great first book about big numbers, and it’s appropriate for pre-schoolers.  I’ve left Millions, Billions, & Trillions by David Adler conveniently in the back seat of the car for the past week so that my sons pick it up and flip through it because, well, what else is there to do while they sit in the car? (This is a little bit like lazy math…take advantage of little moments of boredom and curiosity to sneak in some learning.)  Andrew Clements’s book, A Million Dots , may also engage your child’s imagination.  The 5-year-old and I have been reading this one several pages at a time, because the images and information actually lead to a lot of conversation about all sorts of things (like, “Why is it called a sperm whale, Mom? Does it give sperm to all the fish?”)

3. Compare large numbers. I still feel gleeful surprise when I realize that 1 billion is so very much larger than 1 million. And 1 trillion? Wowza. Big. Maybe you and your kids will experience the same gleeful surprise. First, figure out how long 1 million seconds is. Have you been alive for 1 million seconds? Yes, you have. It is about 11.5 days. (If your older child is interested in doing the conversion math on this to check, go for it!) What about 1 billion seconds? Are you as old as that? Maybe. It’s 31.69 years. And 1 trillion seconds is 31,709.8 years. Put that in the context of the current year being 2018!

The message here? Don’t shy away from big numbers! Jump in and play with them!

(Mathematically…large numbers can capture a child’s imagination and playing with millions, billions, and trillions helps develop a foundation for understanding and conceptualizing them. Take advantage of your young child’s natural curiosity to set these foundations.)