The car is a great place to talk to your kids, because they can’t get away from you. I have definitely used it for many challenging topics (“So tell me again where you think babies come from?”) Yesterday as we were driving home from school, I decided to try out the idea of mathematical functions on my 7-year-old (and the 4-year-old was along for the ride.) If you’re not sure what a function is, no worries. The kids didn’t know either.

First I established the concept of a function machine:

Me: “Okay. So what does it spit out when I put in the letter Z?”

7-year-old: “Nothing…or maybe the letter A.”

4-year-old: “Where are all dese machines?”

Me: “Try another number. Tell me what you want to put in.”

And then the car ride ended, so the game did, too. If we had more time, I’d ask them to make up a machine for me to figure out.  Later in the day I tried a function machine that doubled and subtracted 1 (put in 3 and you’ll get 5, put in 5 and you’ll get 9, etc.) Turns out the 7-year-old was not prepared to handle multiple operations this way (though he was able to see the pattern of odd numbers when I put the inputs and outputs into a table for him.)

The coolest part of this semi-premeditated math activity, though, was watching the 7-year-old sit down for an after school snack at the kitchen table. I had purposefully left open a mathy kids book (How Do Octopi Eat Pizza Pie by Neil Kagan) to the page about function machines… 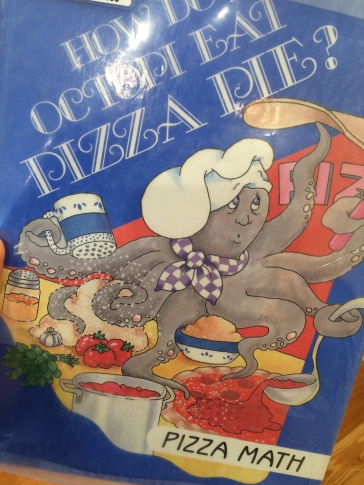 How Do Octopi Eat Pizza Pie? by Neil Kagan

I watched out of the corner of my eye as the 7-year old perused the page. He turned the page. Then he turned back. Then…

“Hey! Mom! These are like what we were doing in the car!”

Ah. That sweet moment of connection! Then he flipped the book closed and went upstairs to play with his Legos. Good enough. All I need is a moment.

(Mathematically…a function is a rule (an equation, a graph, an algorithm), where for each input, there is one and only one possible output. My favorite example of this is a car. For every input (ex: turn the steering wheel a little bit to the right), there should be only one output (the car turns a little bit to the right.) If there were more than one possible output, then we’d be in trouble! It doesn’t really matter if you remember functions from high school math. And it doesn’t matter whether your child learns to call them functions. The learning is in the process of figuring out the pattern, figuring out the rule.)

An added note: The following morning, I pulled out a big pad of paper and some crayons and drew the function machine that is in the first photo above. I wanted to see what the 4-year-old would do. He did not appear to notice the pattern that each shape had one more side than the other. He did, however, LOVE taking his orange crayon and putting a number to each side of the shape. He even noted that there were “corners” that could be counted on each shape. So I pointed out that it was cool that there were the same number of corners as sides for each shape. He agreed – totally cool. In the midst of this, the 7-year-old came downstairs, gazed at the drawing, quickly identified the rule without even being asked, then moved on to raid the kitchen. So count on getting more posts about how to play with this stuff with your kids!