Do you have a lawyer in your house? No, not the kind that actually has a degree, earns a salary, and is an adult. I’m talking about the free-lance, unschooled, and relentless child legal expert who calls you out on every breach of fairness or word choice. I have one. He’s 9. One day, if he keeps this up, he’s going to crush the bar exam.

Until then, I have to manage this energy he has for ripping apart every argument I throw at him.

Luckily, legal arguments have their roots in logical arguments. And, what do you know, math does, too! So, here are some more ways to sneak math into your kid’s day while he believes he is just doing something interesting.

Lazy parent’s approach: I know, I know. We are supposed to be limiting screen time. At the same time, there are some very cool things to be learned on-screen. For our family, the mornings before school would be a mess if I didn’t have the computer set up for watching YouTube videos during breakfast. Before they get to watch Pink Panther, though, they watch a couple TedEd videos, and the riddles are their favorite. (Actually, saying “their favorite” is a bit of poetic license…the riddles are the 9-year-old’s favorite. The 5-year-old whines for skateboard videos.) TedEd riddles are cartoon scenarios that require some logical and statistical understanding to solve. This doesn’t bother the kids in the least because they don’t bother to pause the video to debate possible answers.  They watch. And listen. And eat their breakfast. And, I believe, they are learning frameworks for reasoning and problem solving from these riddles. Here’s an example of one:

Less lazy, more effort approach: You can balance the screen time you use with TedEd videos by reading some books by Richard Smullyan with your child. Richard Smullyan was a “musician, magician, mathematician, and…a puzzle creating logician.” Your child (and you) may enjoy puzzling over his collections of logic riddles together. We have What is the Name of this Book? in our home. I read it aloud – sometimes at bath time, sometimes at dinner time, sometimes at bedtime. I have no problem leaping straight to the answer if I’m asked to. I also sometimes suggest we noodle over the problem for a bit before flipping to the solution. 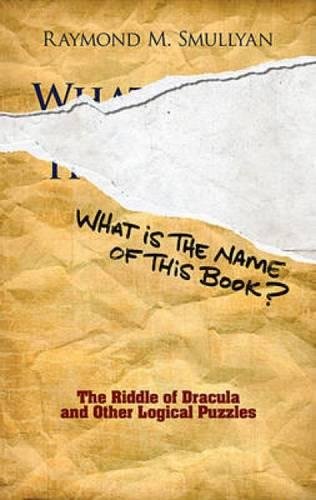 Often the 9-year-old simply busts out with an (incorrect) answer within seconds, or he will declare the problem too difficult to bother with. When that happens, I close the book and we do something else. A little while later, he might tell me he has been thinking of the problem and has an answer. We discuss…and I always remind him how he felt about the problem initially (impossible!) and how he feels about the problem now (doable.)

That’s enough logic for now. There’s more coming in the next post…especially geared for those of you who have ever even jokingly entertained the idea of home-schooling.

(Mathematically…it’s usually not until Geometry class that students formally learn about logical arguments and developing proofs. That’s 9th grade! So far away for some of us. Why wait when there are so many children who are testing their “logic” skills far earlier than that? Playing with logic will encourage the verbal and critical thinking skills that are important for strong mathematical understanding and creativity. And while we are on the subject…do not get confused or upset when your elementary school child is asked to explain “why” their answer to a math problem is correct. This is an important piece of practicing logical thought processes. If your child can actually explain why 7 + 8 is 15, they are very much on track for critical thinking success!)