“In math the technique we use is logic. We only want to use sheer logical reasoning. Not experiments, not physical evidence, not blind faith or hope or democracy or violence. Just logic. So what are the things we study? We study anything that obeys the rules of logic.”

-Eugenia Cheng, How to Bake Pi

The first Be Logical post was starting to feel a little long. The idea is to make these activities and ideas quick and easy for you to implement at home, not to overwhelm you with a long list of stuff.  So, I did the obvious and easy thing. I split the post in half. Here’s the rest…

Plan some logical activities: Here are two options if you’d like to get a little more “home-schooly.” This first option is, I think, the more accessible of the two. Grids for Kids is a collection of logic puzzles whose solutions can be organized into grids. The PDF file will cost you $3, and it comes with 36 puzzles, tips for coaching your child through them, and solutions. Once you read the coaching tips, you can simply print out puzzles as needed. 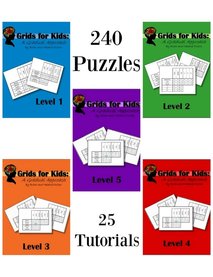 I recently bought the Level 1 set of puzzles and tried them on the 9-year-old. I read the coaching tips first, and I tried the first puzzle by myself before giving it to him. He was completely engaged in it, and now that he has practiced with them, I periodically leave one of these puzzles out on the kitchen table for him to find. I usually check in while he’s doing a puzzle, because I’ve noticed that he likes to move fast, and he frequently overlooks some of the deductions that follow from the given clues. (An interesting note: my son gets super frustrated when he makes a “wrong” mark in the grid. He usually asks that I print another copy of the puzzle when this happens. Instead, I stop whatever I’ve been doing and sit down with him to brainstorm other ways to deal with the “mistake”. I suggest changing pen color, changing symbols, or using white-out. I suppose if he had been using pencil in the first place, he could have simple erased. But he prefers the feel of pen on paper. So do I.)

I also tried these puzzles with my 8th grade tutoring client. She liked them because they made her feel like we were taking a break from “math.” Isn’t that funny? There’s a lesson in there about the way we teach math at school.

If you really dig this logic stuff and want to do some more, try Camp Logic by Mark Saul and Sian Zelbo.  This book is a fantastic collection of puzzles and activities meant for a week long math “camp.” While it does give ideas for increasing challenge when needed, you will likely need to come up with your own ways to tailor the puzzles to your own child to make it accessible.  This is not a workbook but a guide for parents and teachers.

I have used some of the puzzles from Camp Logic to challenge and engage my tutoring clients who are in middle and high school. Today I tried one of the games with the 9-year-old. It goes like this:

Okay, so I explained the rules in a way that I thought would be clear to the 9-year-old. He stared at it a bit, then said, “I don’t get it.” So, I adjusted the instructions as best I could without giving it all away. I wrote out all the digits from 0 through 9 so he could see them clearly.

What? What do you mean?

“Okay. I don’t feel like doing any more of this, Mom. I want to listen to my podcast.”

I agreed. And I also kept my mouth shut regarding how impressed I was that he saw the logical connection regarding the O and it’s place value. I did high-five him though.

A little while later, I pushed the puzzle back over to him and asked if he wanted to try again. He said nothing. He just looked at it. And then he gave the correct answer. (And if you want to know what it is, try it first! Then you can complain in the comments that I didn’t give the answer…)

(Mathematically…while there are numerous branches of mathematics, logic is the foundation of it all. Nothing inexplicable ever happens in math. Many of us grew up thinking of math as the subject in which we felt confident (or not) based on getting the right answer.  This is a narrow interpretation of math. Answers are a big deal, but no more so than processes and reasons.  A more accurate statement is that math is the subject where there is a logical reason for everything. Comforting, eh?)