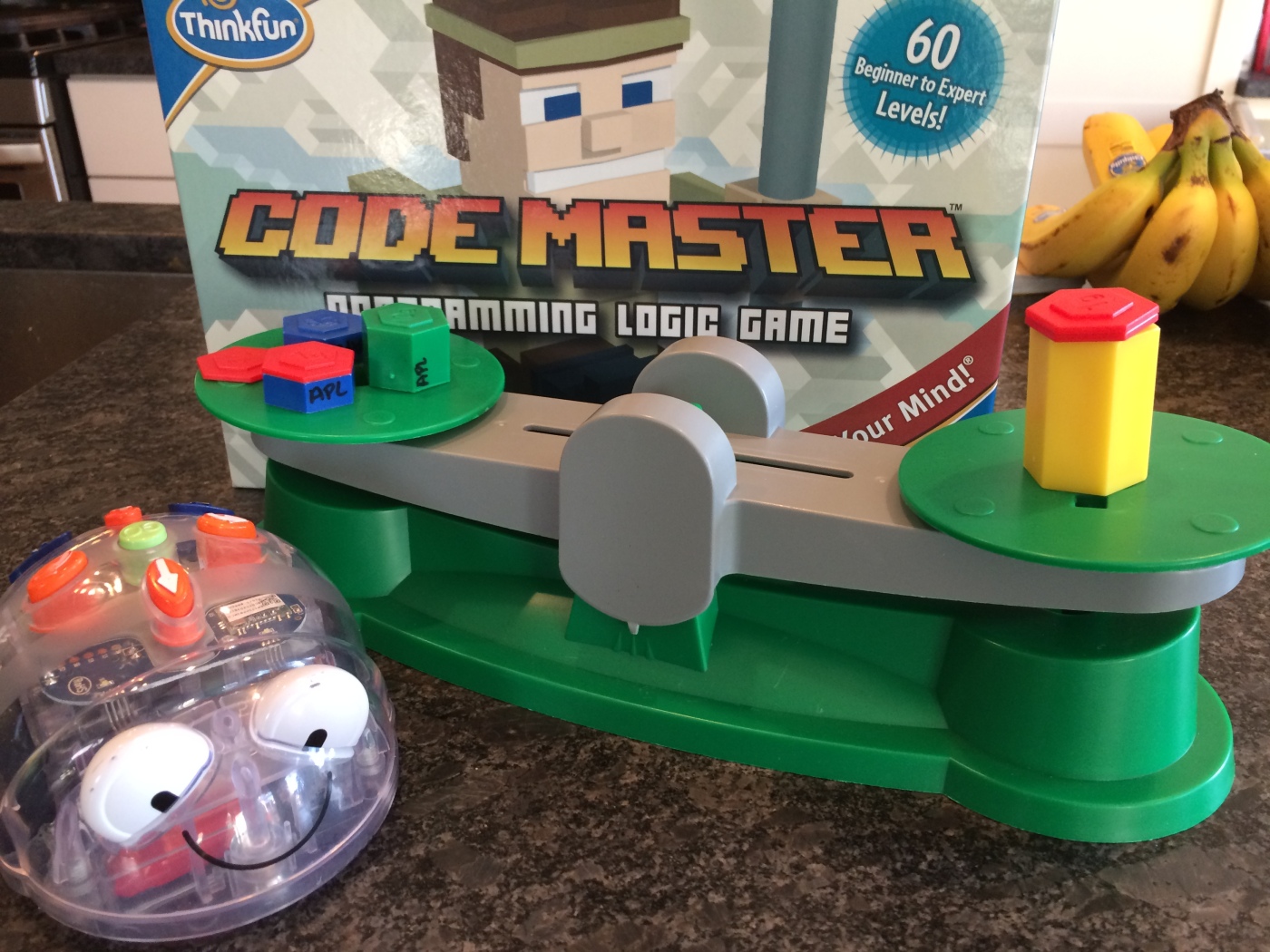 It’s April Vacation here in Massachusetts. Parents all over the state are excitedly or frantically looking for activities for their kids. Lots of us are heading to the local library for…well…books. And maybe a DVD or two. Or four.

The other day, I took the kids to the Amesbury Pubic Library. What I thought would just be a quick trip for a couple of audio books turned into a wonderful fabulous magical awesome mathy moment.  Several of them, in fact.

We were sitting at the craft table in the corner of the children’s room making Yoda ears and Princess Leia hair out of construction paper. The 5-year-old was wandering behind me and found something tucked into the shelf that held the pop-up picture books. It was a clear protective bag, inside of which there was something called “Blue-Bot.” Turns out Blue-Bot is a programmable little robot bug that is geared toward young kids.

And Blue-Bot was borrowable! What? Yes! Yes, of course, we were going to check out this little awesome “toy” that would introduce my kindergartner to the basics of step-by-step programming! I felt like I had discovered a little nugget of gold in the corner of the library. How could this precious treasure just be sitting there on a shelf? Didn’t anyone else know it was there?

While the kids continued to perfect the positioning of their paper Yoda ears, I gazed around at the bookshelves near us. I noticed another clear protective bag, inside of which was the game CodeMaster. CodeMaster is a single player logic game, set up to look a little bit like MineCraft. That made it quite attractive to the 9-year-old. What made it attractive to me was that it is a game with NO batteries. And it was borrowable! Another precious treasure found at the library! I added it to my growing pile of items to check out.

The kids were now fully engaged in their own books and activities, so I wandered around. I began to notice that there were clear protective plastic bags tucked into every shelf. Here was a high quality wooden game. There was an architectural block set. Over there another programming game. Precious treasure was everywhere!

I walked out of the library that day with a pile of books and 3 fantastic activities for my kids. At home, they excitedly played with their “new” toys. The Blue Bot and the CodeMaster games were both well-received, but, of all things, it was the balance set that kept them most engaged. 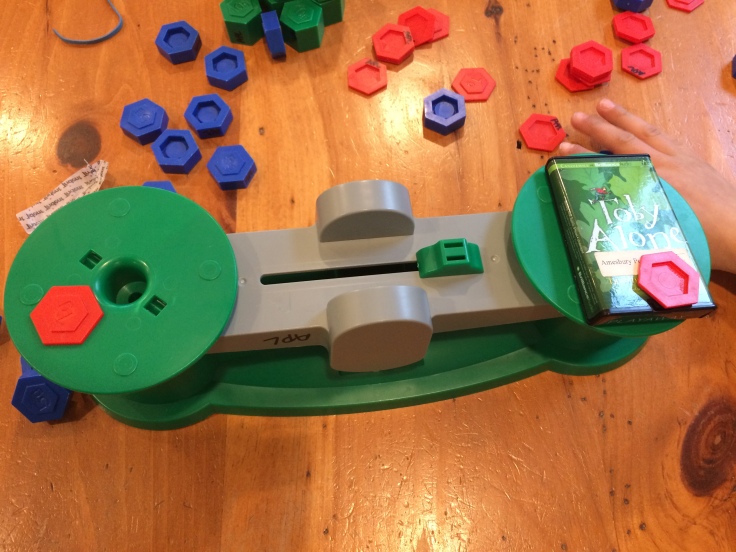 I assembled the balance and left the collection of small weights out on the kitchen table for them to discover and play with as they chose. The 5-year-old was the first to engage. He fiddled with multiple gram weights, and then declared, “Mom! Two 5’s and a 10 are the SAME, even on this balance!!!”

Whoa. That was a BIG mathy moment.

This got the 9-year-old’s attention, and he zipped over to the kitchen table to play, too. Together, the boys placed as many weights as they could on each side, making their own game of trying to outdo each other while still keeping the scale in balance. Then they grabbed our kitchen scale to see how it compared. Some sort of stacking game then ensued. 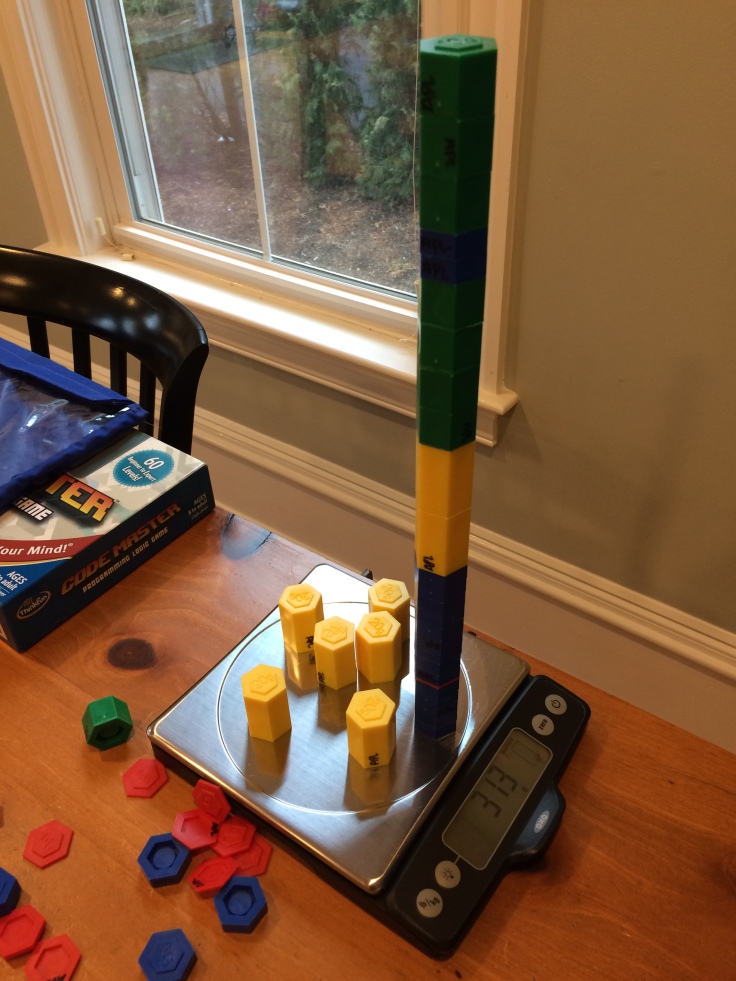 I’m not sure which of them won these games, but their mom was the clear winner in the game she was playing!

(Mathematically…I could write a post about the mathematical benefits of each of the activities I brought home from the library. Games and manipulative toys are the best ways for kids to learn mathematical thinking, logic, and strategy. But games and manipulative toys are expensive if you are trying to have a variety of choices in rotation.  I am so thankful that the children’s librarian at Amesbury Public Library understands the value of these games and has invested in them as items for the community to borrow. Shout out to Clare — thank you! If your local library does not have these resources, ask about the possibility of getting them. Particularly in locales with much economic diversity, it is a great idea to provide access to these developmental activities. And I may as well put this out there, too…if you are in the wonderful position of being a donor to your local library, make a point of saying you’d like your donation to fund these types of items for children and teachers.)