I am holding on to the belief that it is possible to take my kids somewhere – out to dinner, on a car trip — without having to hand over an electronic device to keep them occupied. To that end, I am always on the lookout for little things to have at the ready in case they truly cannot deal with the boredom of waiting for their meals or a destination.

Whether or not you share that belief, this little pad of patterned paper is worth getting. I learned about it from my talented mathy friend Allison, who writes a terrific teaching blog here.

In all honesty, the first time I gave this puzzle pad to my son, he was NOT interested. He looked at it, sighed, and pushed it away.

So, I solved the folding puzzle myself. It was easy because it was the very first one. The puzzles increase in difficulty.  The goal is to fold the paper in such way that the 8×8 grid becomes a 4×4 grid with only black boxes on one side and white boxes on the other. After I solved the first puzzle, I unfolded it and put it to the side while I ripped off the next puzzle to give it a go. At first, I felt like I was wasting something that I had bought for my sons, but then I realized that they were benefiting from watching me get absorbed in figuring out the increasingly difficult solutions, AND as they started to fiddle around with my solved puzzles, there were learning the possibilities. (It’s important to remember that I hand them things like this when they are otherwise bored or unable to walk away from me…most recently we did this on an hour trip on the commuter train. What else are they gonna do?) I keep all the “solved” puzzles in the box with the ones we haven’t tried yet. When I take the box out, the kids sometimes fiddle with an old puzzle or try a new one. I often help with showing them how to fold precisely. 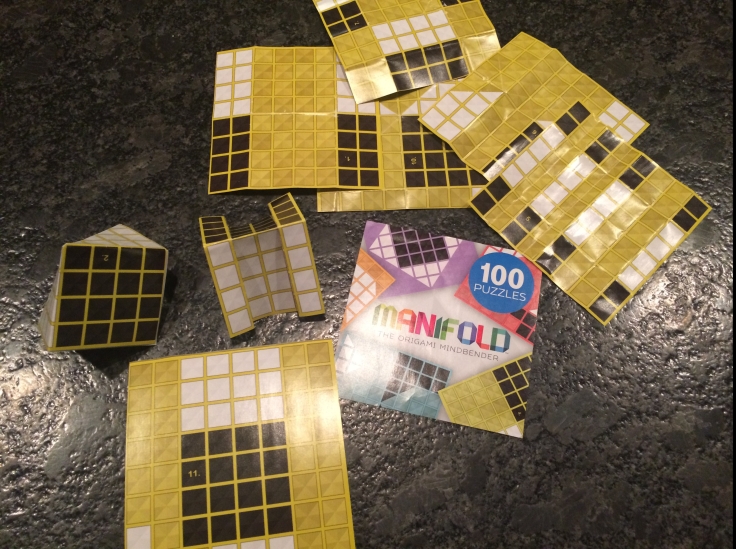 Something particularly cool happened the other day with this puzzle. I took the 9-year-old and a friend of his to lunch. While they sat there…waiting… I tossed the puzzle box onto the table. The friend was curious and began to fiddle with new puzzles. And before we knew it, HE was fully into it. “Can I try another?” “And another?” “Please, one more!” “I LOVE this game!!”

Well. That made finding a birthday gift for this friend very easy!

(Mathematically…Manifold gives the brain practice with spatial awareness and visualization. It will afford different benefits to different people. For example, in Allison’s post, she describes using it to engage a student who was otherwise uninterested in math class. She did not have to force the puzzles on this student, he took to them quickly and happily, like the 9-year-old’s friend. The 9-year-old, on the other hand, was not naturally inclined to sit with these challenges. By showing him examples of my solutions in moments when he otherwise had nothing else to do, he became interested and began to understand that it was not luck that paved the way to a solution. There were some very clear techniques for folding that would bring the pattern together. Once he understood that, he was more willing to try new puzzles.)

One thought on “Puzzling Things”