Not sure how to get your kids to play math? Here’s one way…strategically leave something out for them to discover. We all know that if we require our kids to do something, we will often get push-back. But…if the kid is choosing to engage on his own, the same activity that otherwise was “required” is now an amazing discovery. Do this with activities you know are mathy, and you’ll sneak in fun math development time. You can call it manipulative or you can call it strategic, or you can just call yourself a smart parent!

I’ve got a set of mirror books and a bag of 100 dice. Sometimes I leave them out on the coffee table and wait to see what the kids will do with them. It’s hard to walk past a pile of colorful dice and a reflective surface without stopping to touch them. The kids will start playing, and I observe from a distance. Sometimes I join them and ask questions. 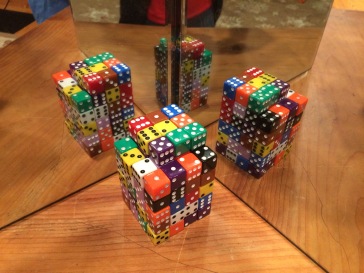 Then he got up and left the room.

Now, this is how my 9-year-old processes. He does that stuff in his head.  I can make a small suggestion when he gets stuck, and he will run with it. The 6-year-old is different, and not just because of his age. If I make suggestions to him, he will sigh and tell me to stop it. So, I take a different approach with him…

The 6-year-old started to group the dice after he had rolled them all onto the floor. Piles of 6’s and 5’s and 4’s and so on. While he did that, I began to order those piles…making cubes of them or rectangles. I said nothing about why I was doing that (because he would have told me to stop it.) He was absorbed in his own activity, but perhaps he noticed and wondered what I was doing. (FYI – I was just putting shape to them to give him another way to visualize the groups. I was hoping it would help him count by 2’s or understand square numbers someday.) When the dice were all sorted, I pulled out a big white board (you can get one, too, at Home Depot!) and asked if we should tally up which pile had the most in it. The 6-year-old couldn’t resist a fresh Expo market and a white board, so he said, “Yes!”

We tallied the numbers up. I wrote them while he counted. Then I did multiplication to the side while he wrote down the answers. We were a team, and that made it  fun for the 6-year-old. And then we were done. We picked up the dice, erased the board, and went to the kitchen for a snack.

(Mathmatically…it is a very good thing to interact in an unstructured way with math concepts. If your kids attend a traditional school, it’s is likely that they are getting plenty of structured math work. But how often do they get to explore, play, investigate, and observe guided by their own curiosity and without any particular end-goal? The most important part of this activity was NOT when I started asking questions or guiding a bit. The most important part was when they were quietly investigating the dice and the mirrors on their own. Perhaps in the unstructured math play time they will understand better something from their structured work. Or perhaps they will discover something new that goes beyond what they already know. Or perhaps they will simply have a lot of fun, allowing their brains to relax and reset and absorb again.)